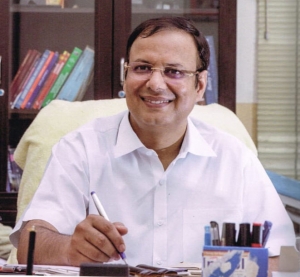 Dr. Ajay Sharma MS, MCh, (Gastrointestinal Surgeon) Senior Consultant Bariatric Surgery, Gastrointestinal and Advanced Laparoscopic Surgery Dr. Ajay Sharma completed his schooling at St. Xaviers School and pursued his MBBS at SMS Medical College in Jaipur. He did MS in General Surgery from Bikaner and M.Ch. from SGPGI Lucknow and left for Japan where he won the prestigious Japanese Surgical Societys award which then sponsored his training. He joined SMS Hospital as an assistant professor in 2012 and is now an associate professor. When he came back to Rajasthan after his M.Ch., he could have easily joined GI surgery anywhere in or outside India, but since there was a scarcity of GI surgeons in Rajasthan at that time, he thought of making a change on his own. There was no such post in the Govt. Hospitals then, hence he joined Fortis. After some time, when the government of Rajasthan planned to start Gastro surgery department, despite having a great salary package, he took a huge leap and decided to go after his passion of working with a Government entity. He joined SMS Hospital when all odds were against his and everyone around him seemed to be skeptical about his plans. Nevertheless, he stuck to his decision and the rest remains history.